You can send us your impressions about visiting of the tourism places.

Make a registration and write your post, send photos.

We create mobile applications and Internet portals to promote your business company.

You can make an order by writing to us:

Tourism in cities. The guide-site to Ukraine

Ukraine has much to offer to its visitors. It has interesting history, developed industry, high-level education and advanced science. Those who visit cities of Ukraine once, fall in love with she charming regions and return over and over again to discover its attractions. Start your acquaintance with Kyiv and other cities of Ukraine right now. 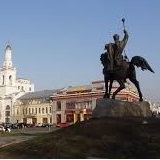 Kyiv is the capital of Ukraine with population of about 3 million citizens. It is situated on the Dnepr River and boasts architectural monuments that are recognized world treasures. Kyiv is the largest cultural, scientific and industrial center of Ukraine, the place of religious pilgrimage and a very attractive tourist destination. Its beautiful landscapes, parks and gardens charm and captivate. Hospitable Ukrainians will be delighted to introduce Slavic culture to their foreign guests.

Kyiv boasts a long and glorious history full of heroic deeds. It is called "the mother of Slavic cities" by right. The golden age of Kyiv falls on the 11th-12th centuries, when Kyiv Rus was a powerful state, the center of trading routes between the Baltic and the Mediterranean. For long centuries Kiev was badly damaged and looted, but Kyiv has survived and still amazes the contemporaries with its sublimity and beauty.

The traditional Ukrainian symbols - trident and blue-and-yellow flag - were officially adopted during Ukrainian independence in 1917 1920 and again after the Declaration of independence in 1991. The trident dates back to the Kievan Rus as a pre-heraldic symbol of Volodymyr the Great. The national flag of Ukraine colors are commonly believed to represent blue skies above yellow wheat fields.